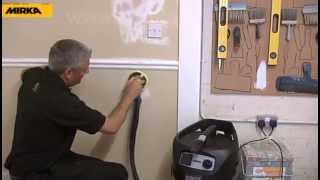 One of the most common problems we come across as painters and decorators are bad walls and ceilings, and by bad I am referring to walls that perhaps have had wallpaper removed at some point, taking with it some plaster, or have been badly painted and have fallen into disrepair. Now there is a great deal you can do with filler, provided it’s in capable hands, especially with the excellent product that is Easi Fill (yes, that is the correct spelling), however there are limits to its usage. Often when walls are in such bad condition there are only two options, either they need to be re-plastered or crossed lined. Now lets be clear, some walls are so badly damaged that sometimes the only option is to have them re-plastered. This also applies to Artexed walls and ceilings, which can be virtually impossible to cross line and at times difficult to plaster. We often recommended cross lining to customers if the walls are in such bad condition that the application of paint will look terrible but the cost of plastering is unwarranted or too expensive for them. Cross lining, if done right, can look like a virtually perfect wall and the range of gauges (thickness of the paper) can cover some really horrendous surfaces. It can also cost less in most instances in terms of labour and materials compared to plastering. It should be noted however that plastering is still ideal, if affordable, due to its durability and smooth finish, there is nothing more impressive than an expertly plastered professionally painted wall.

So lets briefly describe the basic principle of cross lining before illustrating some examples to better demonstrate what results you can get with the cross lining technique. Cross lining to all intents and purposes is wallpapering and follows virtually all the same principles bar a few exceptions. The similarities are you use the same type of wallpapering paste, scissors, straight edge cutting blade and craft knife. The first, and most obvious, difference is the paper is applied to the wall horizontally rather than vertically, which is done to draw the eye away from a straight vertical line. The second difference is you don’t butt each run of lining paper tight together you leave a gap of a few millimeters so you can apply filling compound such as Easi Fill. Now that last sentence was probably a tad controversial in as much that lots of people would argue that its best to butt the paper up close to each other so there is no gap. Now we don’t pretend to be the best in the world at cross lining, however through our own experience and observations we find leaving a small gap and filling works best. This allows you to fill the gap flush with the lining paper, which you can later sand to leave virtually no sign of a join. We have painted many rooms that had been previously been crossed lined throughout the Bridgend and South Wales area and in most instances you could see the joins in the paper when they had been butted tight together. This is also true when the paper has been butted close together and then filled, this in most cases leaves a visible discrepancy in the surface after being painted

This obviously defeats the object that is why we found applying filler to a small gap and sanding flush creates the best results. Below are some photos that illustrate the application of the cross lining technique to help you better understand the results it can yield. This job was completed a few months ago in the Bridgend area with the photos depicting the jobs completion from beginning to end.

The above picture highlights the poor conditions of the walls. Subsequently all the walls had to be crossed lined in order to get the room to a good standard so the customer could eventually rent the house.

Here you can see the application of the lining paper, we used a 1400 gauge paper to take out virtually all the imperfections of the wall. Note the visible gaps that were left between each run so the Easi Fill could be applied at a later stage to eliminate the joins.

Here we applied the filler to the small gaps left between each row of lining paper. This mixture was made rather wet and feathered out over the gaps to remove the visible appearance of the lines. This was subsequently left to dry and sanded the following day. Figure 4 below also depicts the application of Easi Fill to remove the gaps.

Here you can see how the filler was applied a little more clearly, note how the filler is feathered out over a couple of inches to reduce the appearance of any lines or joins. Figure 5 shows the finished result after all the walls were sanded and painted.

This is how the room looked after the walls and ceiling were painted, a complete transformation from how it was depicted in figure 1. The customer was very happy with the end result and was shocked at how it had been achieved with using just lining paper and some filler.

So there you have it, the technique of cross lining can be incredibly effective at transforming rooms that have seen better days and where more expensive sloutions such plastering are not an option on a tight budget. Hopefully this gives you a better idea of the options that are available to you if you are thinking about giving a tired old room/rooms a new lease of life.

WE WANT TO HEAR FROM YOU